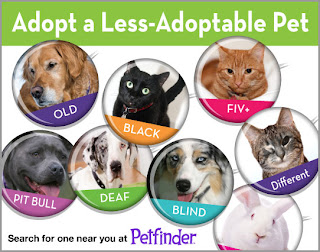 Mica Minnie Moo here!  I want to urge everyone to consider adopting a less adoptable pet next time there's an opening in your home.

Our mom can attest to how wonderful these animals can be.  She's a little slow, so she didn't realize some of her animals were undesirable.  Can you believe that?  Here's a run down: 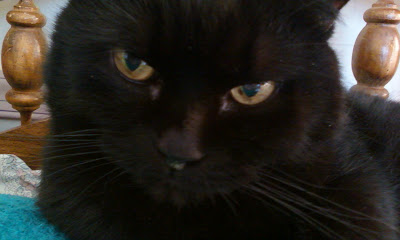 CRIME:  Its obvious!  He's black.  When he was adopted the mom just thought she would have to be careful at Howl-o-ween.  After she started blogging she learned black animals were real problems.  How could she be so ignorant?

FACT:  He's a laid back, mellow dude with a sweet purr who loves to sing.  In his 15 years, no one has been jinxed, hexed or died because of contact with him. 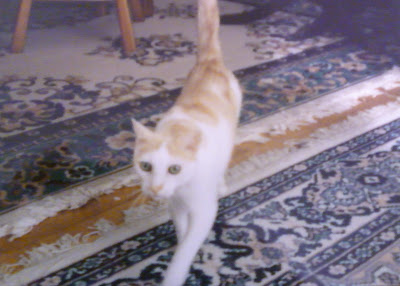 CRIME:  Old, abused and strange.  He certainly had his quirks, but considering his history, they made sense.  He freaked out when picked up, but anyone thrown from a speeding car might do that.  He was easily over stimulated when petted.  The mom adopted him when he was 10 years old.
FACT:  Another sweet, loving boy who didn't hold a grudge against people for their treatment of him.  Despite being 10, the mom had him for 8 years before she had to help him cross the bridge because of kidney disease and cancer.  It took a lot to bring him down. 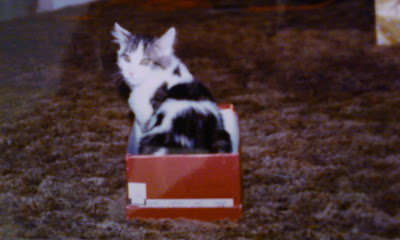 CRIME:  Medical issues.  Born with a congenital heart defect, his heart muscles on one side were three times thicker than they should have been.

FACT:   Although the EKGs and meds were expensive, his time on earth was too short.  We knew he wouldn't live a normal lifespan and this little darling passed away suddenly at age 3. 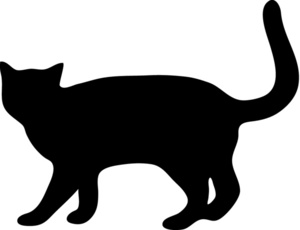 ROBBIE
(Sorry, no photo available.  Yet.)

CRIME:  FeLV+.  He adopted the mom when he was about 1 year old, and never spoke of his past.  She never thought to get him tested.

FACT:  He lived with her other cats for 6 years before symptoms appeared.  He died within the week.  The other cats never developed the disease or symptoms.  Again, another happy, playful sweetheart who's time was too short. 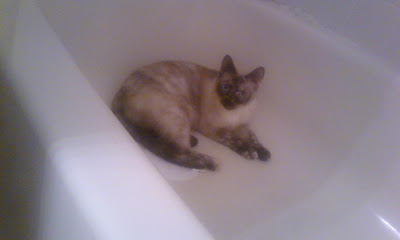 CRIME:  Formerly Feral, shy, skittish and "defensively aggressive".  Although I had enough contact with peeps to live with them, I didn't make it at a regular shelter.  Too wild.  Fortunately, a shelter that specializes in "difficult" to place kitties took me in.

FACT:  I am a work of art in process.  It breaks the mom's heart to see what a great kitty I would have been if my beginnings where more fortuitous.  I know she hopes one day to get me to that point.  I was between 2 and 3 years old when rescued, so some habits may be hard to break.

All the kitties here were loved and cherished.  Knowing what she knows now, the mom would do it all again without changing a thing - unless it were to make some of their stories happier.  Lumpy and Robbie were her special favorites.  Although they have both been gone many years, they are still greatly missed.  In fact, Lumpy's Bridge date is in a couple days, perhaps the mom will do a post about him.

Wow, your human has a great history of taking in kitties that others mistakenly pass by! And she has reaped some awesome rewards as a result. Paws up!

Awwww, how awesome! I didn't know that some cats, especially black ones, were hard to adopt either before blogging. I had a couple of them and always thought they were awesome.

No one should ever be considered "less adoptable". They are just "special.

It sounds like your mom is pretty special, too.

Those labels of problematic cats are human thing for excuses and not really "problems" if people took the time to know each cat much better.
I also want to thanks for the Thinking of You award which I posted about.

Shouldn't an animal get adopted because of the "connection" it has with the potential family rather than how it looks?

Gosh, what a great post. All you kitties sure have a great Mom. She doesn't know that you have some issues and doesn't give a rip. There just are not any unadoptable cats, just uneducated people. Have a great week end.

I really enjoyed reading this! I truly agree about adopting, especially adopting "less adoptable" pets. You are such a blessing to kitties. What wonderful kitties you have and had. Thank you!

All beautiful kitties, and such heartwarming stories too.

Mica Minnie Moo...you are like me. One of the reasons I am an Island Cat now is because I lived the first year of my life as a scared stray...didn't trust humans and was very aggressive. When the lady with the yellow hair caught me, she knew she could never take me to a shelter. I'd never get adopted and I wouldn't survive there. The LWTYH tried to find someone to foster me, but no one was available. Did you know that she actually had a lady at a rescue group tell her "Why waste your time on a cat like that when there's so many nice cats looking for a home?" That made the LWTYH so mad. So she brought me home and has worked very hard to make me a more secure kitty. I am a work in progress too!

Well, we think your mom is pretty darned awesome, so this is just perfect! We say that these so-called "less adoptable" pets are just extra-special ones waiting for the perfect forever families.

This story warms our hearts :)

Your Mom is a great Mom. She is not slow, she is a loving Mom who did not see less adoptable, only kitty looking for furrever home.
Purrs to your Mom!

You have a great mum! Our mum used to have 2 black brothers and cannot understand why some people think they are less adoptable.They weren't caught until they were about 4 months old and were very scared and wild at first but over time eventually became a pair of love bugs.

Kat and the Furrsonality gang said...

What a wonderful message. <3

All kitties are adoptable no matter what is what me and Charlie say!! So big YAY for mum for giving Carl, Lumpy, Kimba, Robbie and you adorable Mica a home surrounded with love! take care
x

We think "less" adoptables are extra special like you!

Thank you for your kind words about Tamir. We will miss our very special ManCat but know he lives on in our hearts.
The Florida Furkids and Mom Sharon

Every single kitty is special despite some horrible pasts that they will never get over. Your love for them made all the difference and continues to do so..they are all so lucky to have you!