When the mom was out having her lobotomy surgery, she went through some old photos and found some of the original Minnie. 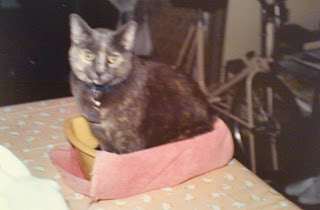 The original Minnie (Generation 1) was a stray who took up residence in the Grannie's garage one Christmas.  She was one of the meanest, nastiest kitties ever to roam the face of the earth and was on the short list (of one cat) that the mom just would not have anything to do with.  She bit and scratched without warning or provocation. 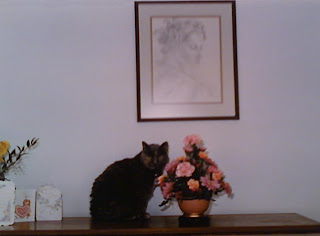 Once the mom's Cape Cod Auntie was visiting and CC Auntie went into the bathroom.  Minnie followed her. CC Auntie was petting her when Minnie turned on her and gave her a horrible scratch down the entire length of her leg.  Blood was everywhere.

After that, whenever the Grannie sent something to CC Auntie, she always included a photo or two of Auntie's favorite cat. 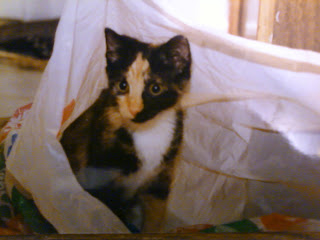 The second generation Minnie was Minnie Pumpkin.  She was born feral under a porch and grew into a sweet but very shy, reclusive girl.  She didn't handle change or strangers well and spent months hiding under the bed after she was spayed.  She loved nothing better than a good scratching and playing with Toby, who was her best bud. 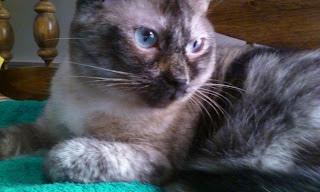 Minnie G3
Anxious MMM has removed her eyebrows and some butt furs.

Third generation Minnie is Mica Minnie Moo.  We were hoping the calming treats would work for her but its a no go.  We have to re-group and try something else. She's going to have the mom removing her own eyebrows soon.

There was actually a Minnie G4.  Another tortie looking for a home at the vet's, but someone else was a day faster than we were.  She would have been Minnie Cooper.  A couple months later, we adopted a kitten named Oui Oui instead.
Posted by Oui Oui at 10:54 PM

It was fun to read about all the Minnies. I think Oui Oui really lucked out in that G4 got adopted. Thank yo for your kind words about Herman. I appreciate your purrs. Remembering how much Herman and I loved each other does comfort me.

What a great story. Thanks for sharing the history of the Minnies with us!

We love the Minnie girls. Perhaps Minnie G1 should have been spelt Meanie G1... ;)
MMM, we really hope you'll stop plucking your eyebrows and butt furs. We don't think your Mom will look good without her eyebrows. MOL.

We loved hearing about the Minnies. Please stop plucking your eyebrows as they may stop growing back.
Luv Hannah and Lucy xx xx

What a great story about all the Minnies! Minnie G1 sounded like a meany Minnie. We hope that MMM can stop plucking your eyebrows and your butt furs before the other cats make fun of you.

Lots of Minnie's have passed through your house. I think MMM's eyebrows look better. But maybe it is just the angle of the pictures. Love the story though. Hope all of you have a fantastic day.

That first one does sound like the devil haha I knew a cat like that once, she was not nice. And the anxiety is something hard to get them through, Cassie has it too.

wow Minnie is furry popular in your house. MG1 sounds like grammie's kitty Scooter. He was really syko.

Thanks for introducing us to all the Minnies!

(We're sorry Minnie G3 is still having issues...you might have to bring out the big guns and put her on some anti-anxiety meds.)

I enjoyed the story of the beautiful Minnie's and I remembered why they were called Minnie. Made me smile then and now.

Minnnie darling, do you have allergies? You remind me of Admiral a bit though Admiral mainyained her furs except on her tummy. That's when the v-e-t knew she was suffering (really!) allergies and started her treatments.

Thanks for sharing them with us, we enjoyed reading about them!

I so enjoyed reading this about the Minnies! Bless your grannie for Minnie 1. Her sweet look belies her temper. I am so sorry to hear that the calming treats do not work for the current Minnie. I was thinking about them for Annie. She's a little like Minnie G2. I also wonder if G3 has allergies. I really hope you're able to find a solution for her.

Oh my goodness - your peeps sure did have a lot of Minnie's.

How neat that you found those pictures! We really enjoyed learning about the three generations of Minnies (that Minnie G1 sure sounds like she was a rough and tough girl).

MMM, how is that calming collar working out for you?

they just mite haza sum thin her bee lookin for; we trust em and haz used them over de last three yeerz for diffrunt stuffs

Az fur Princess Julie tell your mom not to wurry if she not dere, she here wif her Gman! ^.,^ since da plastic cover iz still on da ponds da little birdz walk on it looking fur seedz from da treez, and both Julie & Gman lookin fur birdie stew :O

I love how there are multiple generations of Minnies!

Now that was a great Minnie history!

so why wasn't Oui Oui a "Minnie Oui"? is that because she was so cute you shouted YES! YES when you saw her (in French, of course, because you was so moved by her beauté and joie de vivre). I'll bet that's it. otherwise, your cast of Minnies has included quite a few interesting characters. good lucks wif dat. purrs...

Now all you need is a Minnie Mouse! I'm sure all your kitties would love her to death.

Have you tried the Feliway dispenser for MMM's anxiety? It has worked for Domino. Her belly fur has grown back in nicely.

We enjoyed reading about the generations of adorable Minnies! xx

We are glad for YOU, Oui Oui! Sorry ta read about that first Minnie...

TBT says we had a Cat-Who-Came-Before named Tinkerbelle who was evil to deal with but it was only cuz she got injured as a kitten by a terrible woofie.

Only TBT could handle her (adopted from a Bein sister). But she and he lived alone fer years and got along good.

Ah. what wonderful stories of the Minnies. I hope you DO get Minnie G4 one day, because Minnie Cooper is the coolest name EVER.

I hope sweet MMM can find something to help her relax. She's so beauteous!

We sure loved learning about the Minnies! Lookit those gorgeous blue eyes on Minne G3!