Coconut Oil and the Kitties

So many of our furriends have blogged about, commented on and recommended coconut oil, we had to check it out for ourselves.  We did have a bit of a problem finding it as our usual grocery store didn't carry it, but we found it in with the cooking oils at a different store.  So we set some goals.  For Oui Oui and Carl, fix their dander from the dry winter air.  For Mica Minnie Moo, sooth her Martian eyebrows, and Julie?  Well, can it help attitudes? 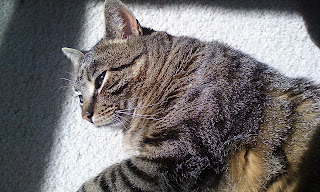 Stop telling my secrets, the mom!

Immediately all the kitties LOVED the taste, even fussy-as-can-be Oui Oui!  The mom was shocked.  She also tried a small amount of it, and its very mild tasting.

Its been a short while, and Oui Oui's furs are softer (Carl's fur is naturally very soft as he is half Persian).  Both Carl and Oui Oui also seem to have less dander. 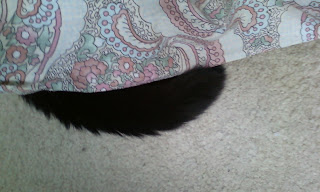 Our dosage?  All the kitties just lick some off the mom's finger every night and a little seems to go a long way, but maybe a quarter of a teaspoon at night at the most.  It seems like it would be good to keep kitties regular, but as none of the kitties here have that type of problem, the mom tries to be a little cautious so no one gets the squirts. 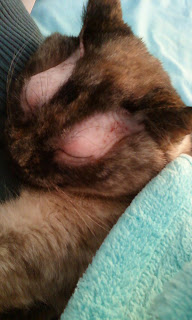 What can I say?

She has been on kitty Prozac a couple weeks now, and guess what!  Nothing's changed!  Ok, she's stopped hissing and growling at Carl, but the problems during oiling remain.  And now she shakes and makes bad kitty sounds too.  The mom has tried smearing oil up and down her front legs so she has something to do instead of hair removal, and playing with her when she starts the removal process to distract her, but its a lot of work.  She is one of the laziest players ever, she just sits there, batting, so she doesn't tire out. 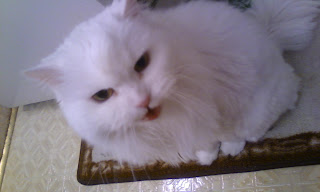 Why does everyone pick on me because of my supposed "attitude"?

So the question is, can the oil work from the inside out?  Because the oil on the outside just encourages more licking.  An Elizabethan collar might work, but MMM would probably have a heart attack from it.  We'll do a follow up in a couple weeks, when its had some time to work.

Tomorrow, Coconut Oil and the Beans - a couple really good uses for coconut oil and one really strange one.
Posted by Oui Oui at 9:57 PM

We is intrigued by the coconut oil. The Human has no real reason to give it to me (as she sees it did provide an attitude adjustment for Julie, MOL!) but she's curious if it might be a "treat" for me. Before my tutoring last summer, I was SUCH a skinny boy she used to worry I was starving so she might've tried to feed it to me, but now I have, ahem, the opposite problem so she thinks I don't really need that kind of treat. But I think I WANT some!

Our Mommy's first furbaby pulled all her hair on her back out when the human baby was born. Took about a year, but she finally quit. Hope that gives you some hope for your sweet girl. XOXO

My human already knew where to get it (our local Trader Joe's), so she got some - and the only one who likes it is Binga! She tried sneaking it in my food, and it mostly made my food taste a little yukky. Boodie is just not interested other than a sniff. Binga totally thinks it is a treat. It's only been a few days, but my human is temporarily using it instead of the lactulose the vet gave her to keep her "regular." We should know pretty quickly whether it is working!

I wish I had an answer for Mica Minnie Moo - the poor girl is so stressed out! I wish Jackson Galaxy came to your town because I think he could do something for her.

You've joined the Coconut Revolution! MOL I stopped putting it ON Star because it did just encourage more licking. She's happy just eating it and it's doing a good job of keeping down her season change rash.
I wonder if you should put some on a spoon in another room and brought it to MMM? Then she doesn't have to hear the evil jar lid noise?

Mommy stopped putting the oil on my spot after I left oil spots everywhere I sat. MOL! She adds the oil to our food and it works great too!
We hope it works for MMM.

Moor MMM. She's so stressed out that it sounds like the coconut oil is just adding more stress, not helping with it. We hope you find an answer to help her relax.

Wow MMM is sure one stressed kitty, hope it works as that cone thing is awful.

Poor sweet MMM, we hope someone has some good suggestions! We are using coconut oil for Sisters Zoe and Dolly and we have noticed quite an improvement already.

MMM...tell yur mom ta puts de oil in de frig til it turns solid N white....then her mite be abe bull ta put a wee amount on yur eye brown as like a lotion consistency.... we had ta uze that big werd ther....her can sorta kinda smeearz it in then like when peepuls putz lotion on there skinz.....her will hafta bee quik tho coz once it touches her finger, de heet frum her finger will turn it bak ta de "oil" form

We're big fans of coconut oil and yes it works both ways. But with MMM it's not for her. Have you tried flower essences?

we haven't tried the coconut oil, but mom is looking into it to help with the ummm - hairball issues - around here.

oh sweet pretty Mica Mini Moo, we wish you would stop removing your furs, but to us you are gorgeous.

our the mom just started using that oil in her non-wheat stuff baking as all the books say it's good for that. she's not making french toast so personally I doesn't care.

Sounds like good stuff. Glad its helping and that it is liked. Mum says she might have to check it out.. Hugs GJ x

Oh MMM SWEET girl, please...please be at ease. I so wish you could. I wish the oil could help. Mommy will have to get some for me to see if my dander issue will go away.

Oh MMM we wish the coconut oil had been the answer for you. We hope you will find something that helps that evil scary feeling you have, we want you to be happy dear one.

this was super interesting. I am toying with trying this with Cody but because of his allergies I am afraid to try it. If I do, I will wait til after BlogPaws, I am praying he doesn't have a flareup before I go because my husband does NOT know how to pill him!
Looking forward to further updates.

Poor MMM. She looks so sad, and we bet those furless spots really hurt. Mom keeps meaning to get some some of the coconut oil for a couple of us who have dry skin, but is always forgetting about it. She needs to quit thinking about herself and think about us more. Prayers, purrs and hugs from the kitties at The Cat on My Head, Lily Olivia, Mauricio, Misty May, Giulietta, Fiona, Astrid, Lisbeth and Calista Josette

Wow, we have heard about plucking eyebrows, but that seems extreme MMO!

did teh human try this ancient? here's what you do:

even if it doesn't work for eyebrow furs and 'tude adjustment, it does feel good to sing that over and over again. good luck!

Dear sweet Juliekinz, me luvz you jus da way you are, you not need a "Tude" adjusmnt ^..^ ♥♥♥♥xoxoxo your Gman

I knows wheres the bestest kitty coconut is to put on furs. It's all raw and cheaps but I won't brag it unless you wants me to. Nots want to be spammy for the kitty. It is the gooder schtuff.

Excellent allocation! I really enjoyed learning coconut oil and the kitties mentioned views. To take my kitties best care through using coconut oil best purposes suggested ways seem to me highly effective all the way. Thanks.
benefits of coconut oil