How to Make a Flat Cat - Tabbies

Welcome back kitties!  Today we are going to color a tabby.  Essentially, its done the same way as we did yesterday.  The main difference is we are going to be using very short strokes instead of the long sweeping ones for long haired cats.

The photo was of Carl (our house panther) but I am going to pretend its Oui Oui. The lesson here is you can color your kitty any way you'd like, without regard to what the original looks like.  The photo had a disproportionately big head because of the camera angle, so that is why today's kitty has a big head. 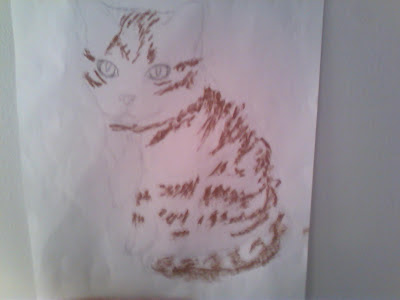 Here I've blocked out about where the stripes go. 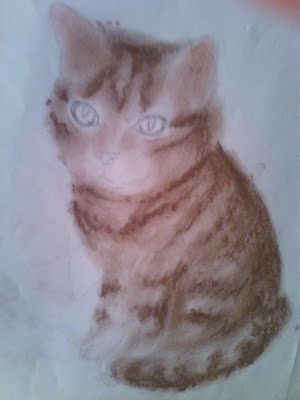 I've smeared the first brown, using the color on my fingers to fill in the areas between the stripes.   I've also decided to get rid of the tie. 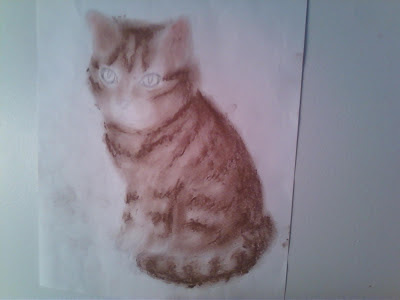 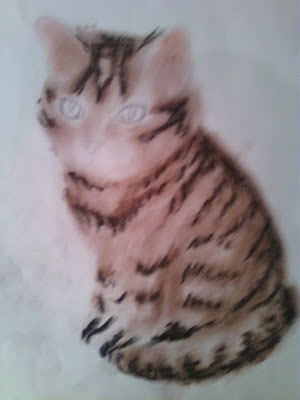 I usually don't use black, but I'm using it to accentuate the stripes. 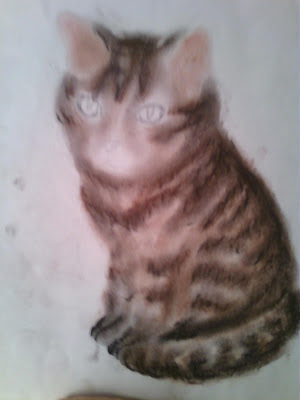 I've smeared the black and gone over it with a dark brown.  Now when I smear I am trying to leave very short strokes so the stripes look banded. 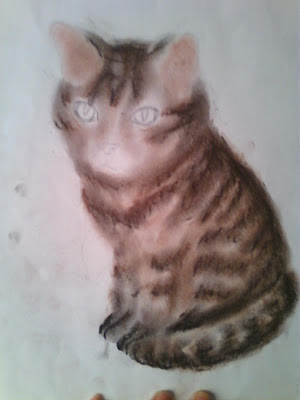 Just building the layers.  All the strokes are short.  I draw them very quickly, keeping them fast and loose.  Hee, hee. 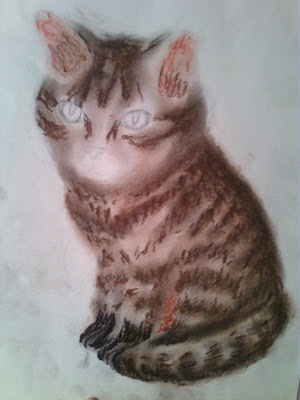 More of the same.  I added color to the face with pastel on my finger as well as little strokes in the stripes.  I even did the ears that way. 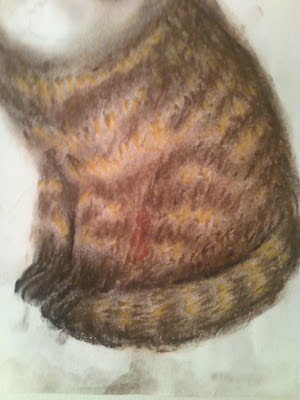 A close up.  I've worked in more brown and black then added a little yellowish tan between the stripes to give the fur a richer look.  Also notice there is a reddish brown on Oui Oui's tummy.  Her belly  has a lot of ruddy fur. 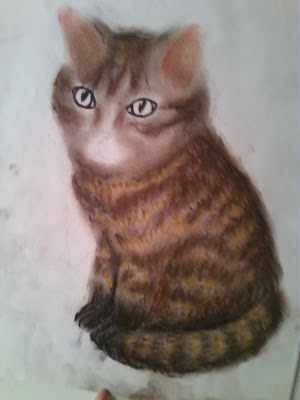 Starting work on the face.  I decided to outline the eyes.  I'm using a combination of adding color with my finger & strokes. 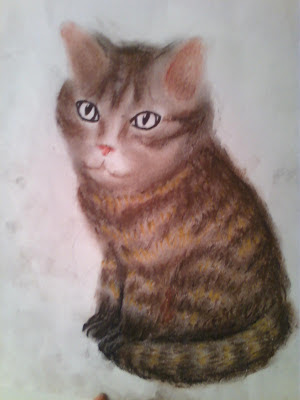 Using a sharp edge, I've added pink and brown to the nose and used brown for the lips.  I've smeared both a little, just to take off the hardness. 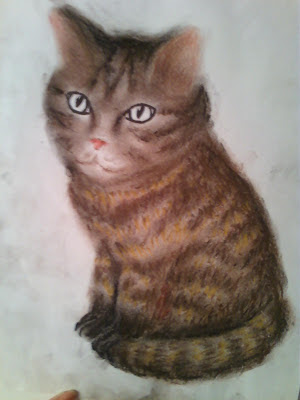 I've added more color.  I can also use white to change anything I don't like about the nose and mouth.  I also outlined one side of the ears with the yellow-tan. 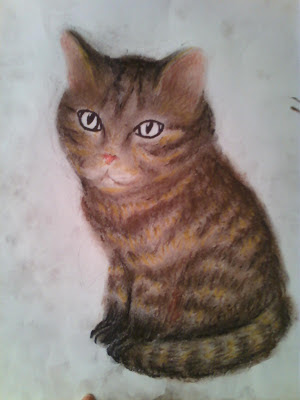 I've added the same yellow between stripes to brighten the face and lowered one of the lips.

I've given Oui Oui dark paws so you can see a little how to do dark ones.  Maybe I'll change them from house panther/ meezer paws to tabby paws tomorrow.

I am going to have to stop there tonight.  Tomorrow I'll go over the eyes.  I have a drawing of MMM that could be colored.  Any requests?  Is there anything you'd really like to see?

Thanks for visiting and for your patience.  I hope you try to make one of these. and I can't stress how easy and flexible pastels are to use!  Many of the moms (and dads) say they can't draw a straight line.  Well guess what?  I can't either!  And not that I would want to!  Have a little faith in yourself - I do!

I'm sorry about not leaving comments, again, this just takes so much time!
Posted by Oui Oui at 10:43 PM

Mommy says you make it look so easy. Happy Tuesday!

My human says artists don't have to draw straight lines! These lessons are amazing!

Mommy loves to watch people draw and color because she can't. She notices how they often color in the facial features first before dealing with the rest. But those are human portraits so maybe it's different?
She's now tempted to get a box of pastels and try coloring something.

PS/ She bought a coloring book some time back and used color pencils. Our verdict? A 5 year old kid can probably do better. MOL.

The way you layer on colors in ways we wouldn't have anticipated is amazing. How do youkeep helpful kitty paws out of your pastels? You must have a project space in your house you can close off. Newton would love to slide across something like a pastel drawing.

I am absolutely loving these posts, and your drawings.. so beautiful!

I read this thru and then it was fun to scroll down to see how the stripes come out more and more vividly along with the face. You make it look easy. :)

Mom likes how this tabby is coming along. She thinks she might be better with the short squiggly strokes…probably harder to make a mistake. She looks forward to seeing how to do the eyes. Purrs and hugs from the kitties at The Cat on My Head, Lily Olivia, Mauricio, Misty May, Giulietta, Fiona, Astrid, Lisbeth and Calista Josette

Wow, you make it look so easy!

You are so talented! I am impressed!

That Oui Oui is looking good (almost as pretty as the REAL Oui Oui)! :)

Thanks for these great lessons, Mom Paula!

That's beautiful. I had no idea how to get those effects. Thank you.