MMM and the Psychic

Recently we were contacted by Psychic Source which features pet psychics who help people with their pets, even help find lost ones, and were asked if we might be interested in a reading.  The mom thought this might be a chance to understand Mica Minnie Moo a little better, but having never done this before, was a little nervous and didn't know what to expect.  Her reading was with Nancy, an experienced pet psychic.

Nancy was really nice and personable.  She had MMM's picture to work from, the mom having sent it to her in advance.  She asked a few basic questions, like how old was MMM, how long she lived with the mom and what we wanted to know about.  Then the experience began!

Nancy said MMM is a cat who always expects the worst to happen, based on her past history of abuse.  For four difficult years, she relied on her physical strength and hidden emotional reserves to survive in her first home, then on the streets. 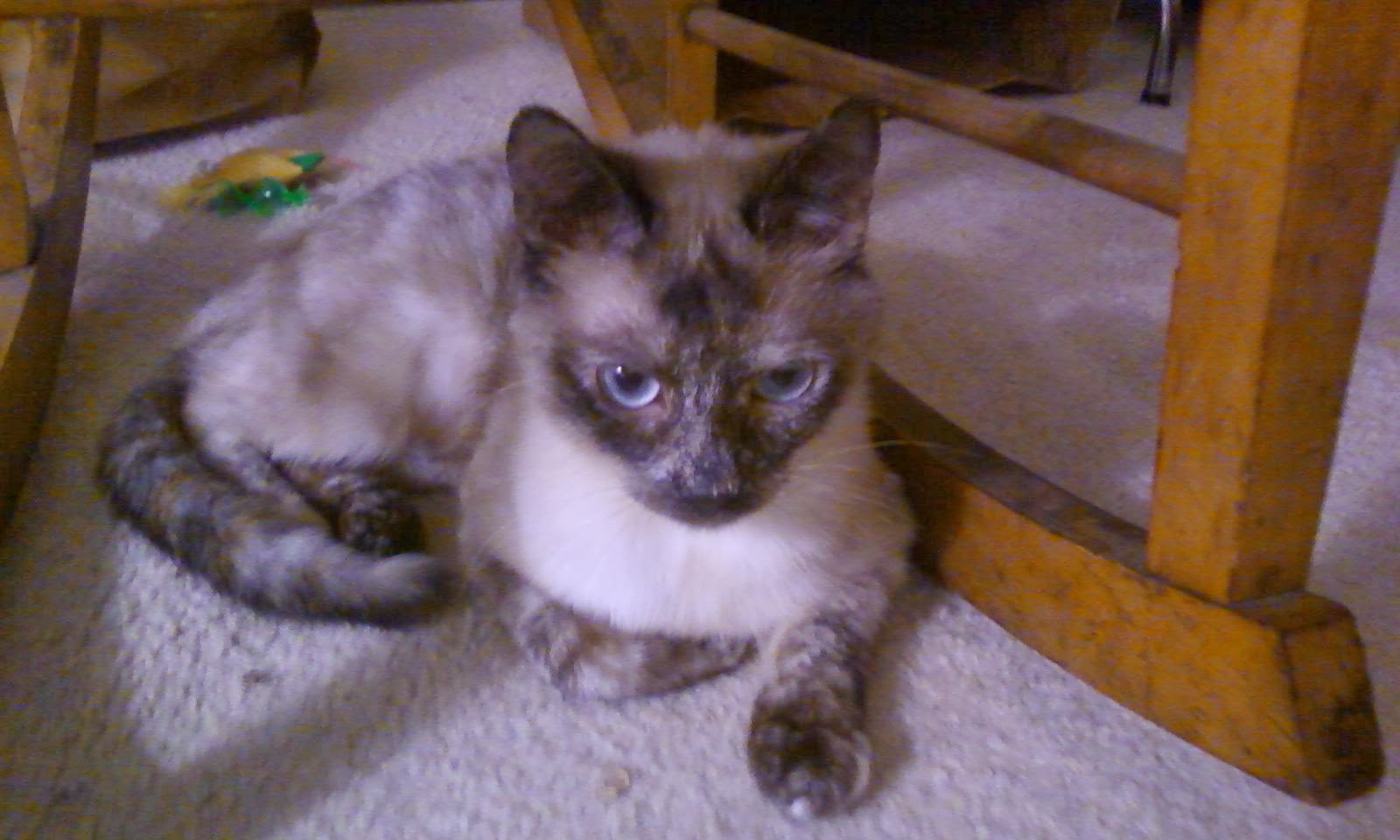 The first photo of MMM.
How thin she was then, almost half her weight now.

Her first owner was a man who engaged in criminal activities.  He was selfish, looking out for only himself, and was mean and uncaring to all animals (and people too).  He didn't take care of MMM properly and she was always hungry.  She followed him into the kitchen looking for food when he went to fix his own meals, he would hit and kick her instead of feeding her, and she eventually ran away from her hostile home.

Although she knows her situation has changed, she is still healing and recovering from her past, and this might take a long while.  Her scratching and licking off her fur is her way of dealing with the stress.  She feels connected with me but needs to be reassured over and over again that she is loved.  She feels most secure when she is asleep. 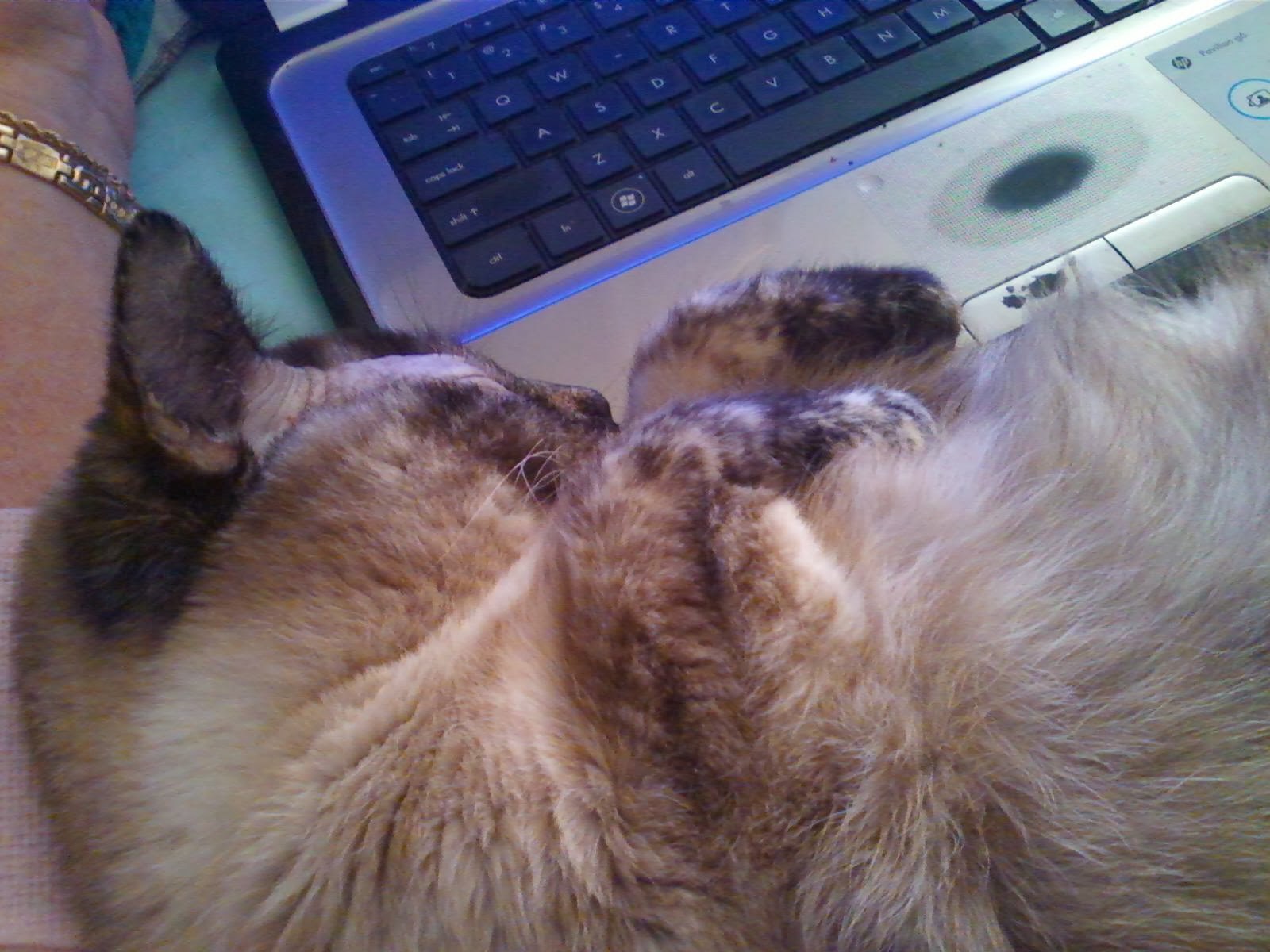 Nancy said MMM would sleep with her tummy up
and I laughed because she never exposes herself if she can help it.
Well, a couple days later, she was sleeping in my arms
when she rolled over with her tummy up.
She was so close to me, I couldn't get the full tummy shot
but you can see it's up.


In regard to Carl, whom she has always disliked even though he has never shown any aggression towards her, he reminds her of another black male cat who picked on her when she lived on the streets.

Nancy felt MMM could use some vitamins, that there was something lacking in her diet, and MMM would like her own cat grass.  Was that because I bought some for Oui Oui (who hogged it all) for Christmas?  It made me smile thinking it was.  She also said MMM is a natural healer, but towards people, not other cats. 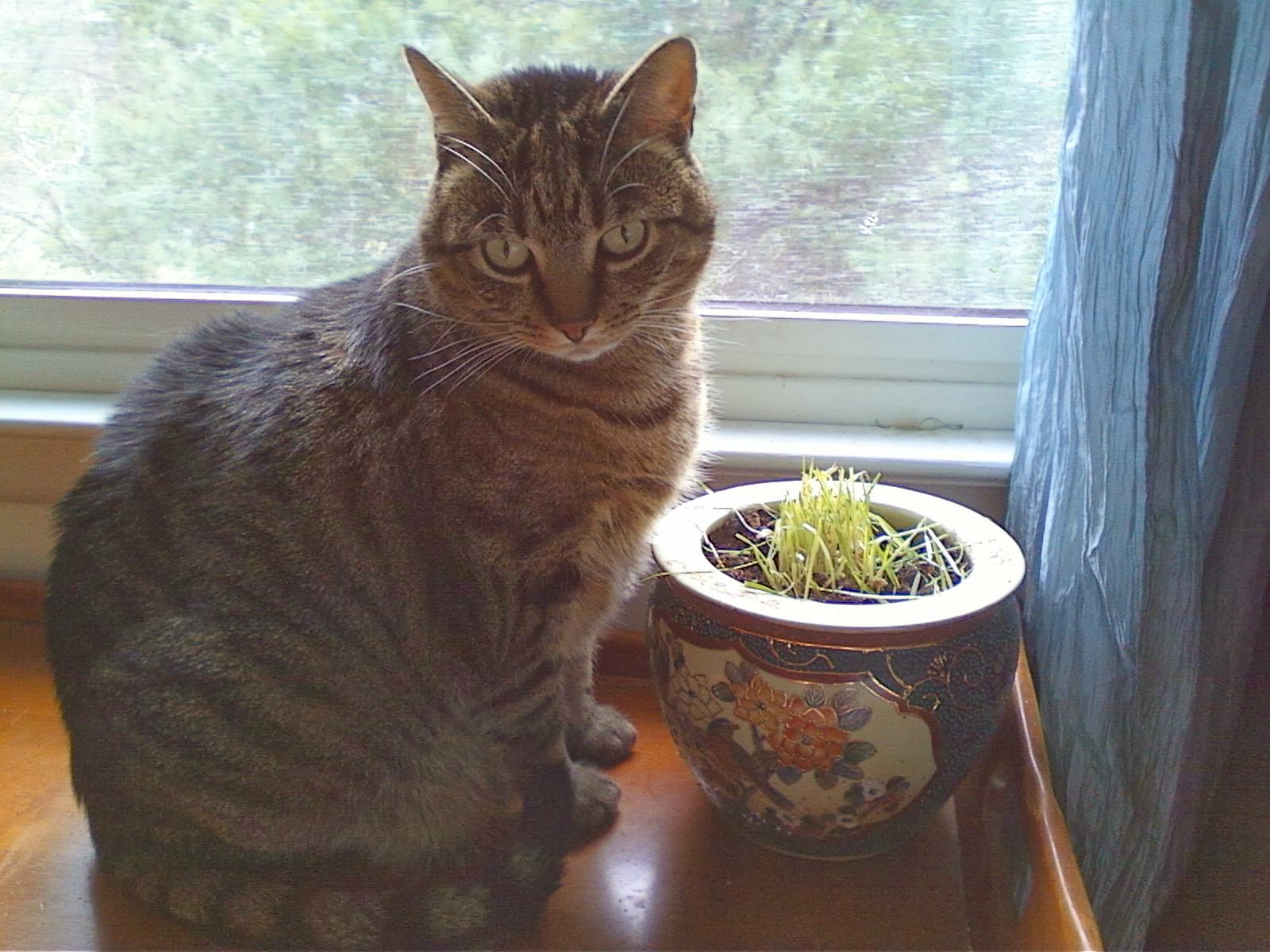 Oui Oui and her cat grass, but where is MMM's?

After this, I mentioned when MMM came to live with us, she didn't know what being petted was.  Nancy said that was because she didn't know what love was, she had never been petted, and no one had ever looked out for her.  It was really heart breaking, and some of what Nancy said was difficult to listen to.  I've always felt she would have been a great, trusting and loving cat if she had had a better start in life.

I tried very hard not to give away information, and it was interesting how Nancy picked up on a number of things I thought might be so and had never published, so I know she didn't come by it by reading it here.  For instance, I always thought MMM had been abused and had run away from home because of it.  This is the first time I've posted my belief.

When I was working with Layla from Cat Wisdom 101 on Animal Communication, Layla mentioned when she looked at a photo of MMM, she had the impression MMM had been abused and that she had been kicked in the head where she was removing her fur, something else I didn't publish but Nancy mentioned.  I'd often wondered if MMM disliked Carl because he was male or he was black, or both.

We also talked about my mom's death and she had some interesting insights there too.  It was very emotionally draining, and I'll pass on that part because it's hard for me to talk about it.

Nancy made a prediction which I hope comes true.  She says a yellow male cat with grayish green eyes will find me and he will bring a lot of joy with him into our life.  He'll be about 2 years old, and MMM will take him under her wings.  It's something nice to look forward to!

So, would I recommend reading with Nancy?  I have to say, I would.  In fact, I'd like to talk to her again, now that I've had time to think about some of the things she said.  I feel like my relationship with MMM has been recharged, that I gained some insight into her behavoir and there was validation of suspicions surrounding MMM's past.  There are a few things I wish I had asked.  All in all, it was a very positive experience.

I'd like to also say, MMM has for the most part stopped scratching herself.  I give Layla credit for that.  If it wasn't for her help with animal communication, I think we'd still be dealing with bloody temples.  However, MMM has been licking some of her fur off, and I haven't been able to break through that behavior.  I'm really hoping I can put some of my new knowledge to good use to help her with that.

I didn't receive any compensation in return for my review, and the opinions are all my own.
Posted by Oui Oui at 10:02 PM

Interesting indeed, I'm open to the possibility, but then i find many to just be very insightful and creative. I mean the cat can make up a story about this or that and say he saw it, if done right, can't prove he didn't. So who knows. But there is a connection between animal and human, have felt that a few times.

It sounds like Nancy was really helpful in validating some of your thoughts about MMM's past, and in understanding her better! I really would like to see MMM stress-free and without licking or pulling out her fur. Maybe with time...

This was one of the more interesting readings Nancy has done. I don't think it's an accident that she got into more detail than with some of the other bloggers. I'm glad we both picked up on MMM's previous owner kicking her but I don't agree with some of the details. What matters is what you believe and how you feel. It sounds like it was a really positive outcome.

That was very interesting about MMM. Gives you lots to think about but not sure it will help MMM.
Anyway it was fun hearing what she had to say. Take care.

How very interesting. I hope MMM continues to recover from her past difficult life, and that this reading has helped you both, even if it was hard on you.

Yes, that was interesting and is surely food for thought...let's eat!

Very interesting, and I think you went into this with a good frame of mind, wondering about "unmentioned" items, etc. Poor MMM, meezers are so super-sensitive to begin with, and then to be mistreated...it's just heart-breaking. Thank goodness she has you, despite your crumb pie threats!
I hope the news about your Mom was positive--{{hugs}}.

What an interesting reading! I know you read ours, and honestly, I'm not sure how well Nancy was able to read Wally, Ernie & Zoey, but that's okay. Psychics can't be 100% all the time.

It sounds like she was able to connect with MMM...and confirmed some things you thought all along. It makes me sad to know MMM is still feeling the effects of her early days.

I am completely with the Tabbies of Trout Towne.

I can see where this would deepen your relationship with MMM. I even feel more love for her. If these things are true, it's just so sad and emotional. It's interesting what she said about MMM feeling the most comfort when she's asleep because I've noticed that her in pictures of her asleep, she looks so happy and loved. I'm so glad she has you.

p.s. Annie got a package today. We haven't opened it yet but thank you!

That's really cool! I'm so glad that Nancy's reading was so focused on MMM, and that it helped connect some dots for you both. How wonderful that your relationship has been recharged. :)

Big hugs to you all!

Oh my goodness, poor MMM!!! I do NOT understand how people can be so cruel. I am SO glad she ran away and found you! She has a wonderful home with a very loving human now. :)

I hope the prediction comes true. That sounds like a great thing to look forward to!

That is a very interesting reading by Nancy. I sure hope Mr Orange Boy turns up soon!

That so sad about MMM hopefully the reading can help her especially the joyful Orange Marmie purrs.

Heart breaking~ :'(
but Sweet MMM has a Good Life now, as time passes her trust grows :) and you will see the changes in her.