First, we have some exciting news!  Mario awarded us the "Thinking of You" Award, and we are so grateful!  It became too late to really do justice to the award today, so we will post about this early next week.  Mario, you are such a sweetie and thanks for thinking of us.

Instead, we are posting some pix of those who came before. 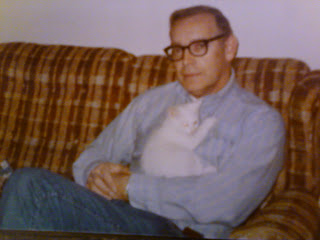 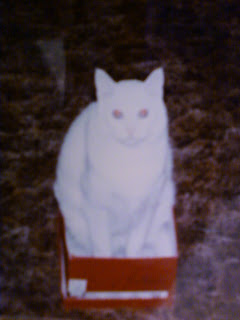 Above is the mom's dad with Attila, the mom's second cat.  His mother, Leia, was pregnant when the mom took her in.  Attila was all white with blue eyes, but he wasn't deaf because he had meezer blue eyes, as you can see from his siblings below.  Attila was the sweetest, most loving kitty ever.  Maybe it was because he was never separated from his mom? 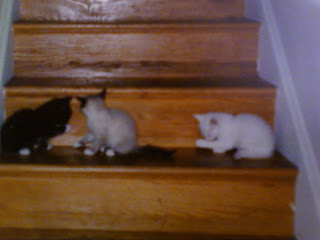 From left to right, there is Shadow, Figaro and Attila.  Attila was the Potty Box Policeman.  He checked to make sure everyone covered up properly after themselves.  If they didn't, he took care of the problem himself. 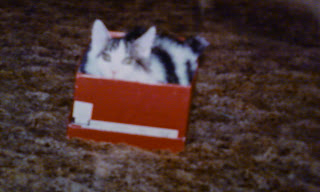 Here is Kimba (in a popular box).  He had a congenital heart problem and didn't live past 3 years.  His fur was as soft and long as Julie's. 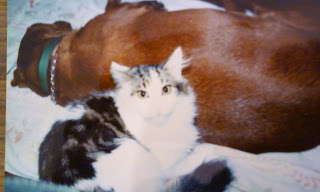 Kimba with Ninny.  Ok, her name was Ginny, but Ninny was more appropriate.  Ninny hunted in the garden and ate bees.  When she'd catch one she'd shake her head after being stung then hunt the next one.  She drove the mom crazy with those bees, but they didn't seem to do any harm. 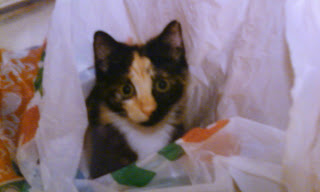 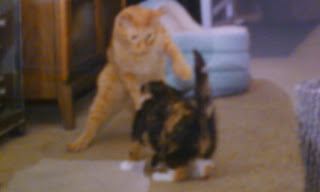 Minnie Pumpkin showing her tortie attitude!  She's playing with Toby, who was about a year older than her.  They were instant friends. 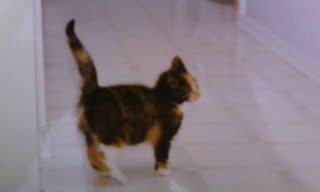 Both Toby & MP were Former Ferals.  Toby was born in a barn, and MP under a porch. 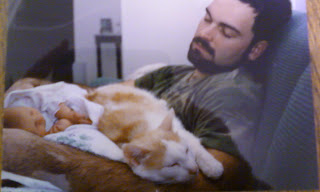 The Girl, the dad and Lumpy.  Lumpy knew his place in the world and insisted on occupying it.  Having been tortured and thrown from a moving car, Lumpy crawled out of a Louisiana  bayou. 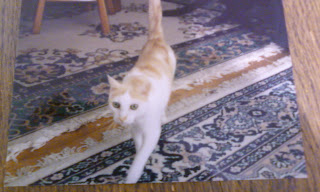 Lumpy was named for what he looked like when those ignorant people got done with him.  He was missing fur, teeth and his paw pads were disfigured permanently.  He lived to 18, and was 15 before the mom could pick him up. 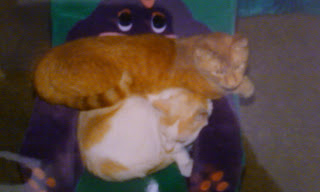 Lumpy was possibly the mom's favorite cat of all time.  Maybe it was his quirks?  He was Toby's mentor and adopted Toby the day Toby became part of the family.  Lumpy didn't have anything to do with the other cats. 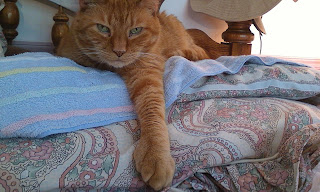 Toby showing off some of his extra toes.
He had 22 toes in all.
Have fun and enjoy the weekend, everyone!
Posted by Oui Oui at 10:30 PM

Wow, those kitties left some big paws to fill! That is quite a special bunch.

Thanks for sharing your history with us... we feel like we know you better already!

We really loved this Friday Flashback. Wow the toes and happy that Lumpy had a happy ending after a horrific beginning. Bad karma for who ever hurt him.

Wow! Your Human has had LOTS and LOTS of kittehs!! We love her for rescuing Lumpy and giving him a wonderful long life! He surely deserved such love and happiness XOXOXOXO

What a wonderful history lesson!

We love reading about "before" kitties and we are so pleased he ended up in a happy and safe home being loved.
Luv Hannah and Lucy xx xx

So many kitties and all so special. Thank you for showing Lumpy that not all humans are like those who abused him.

WEll that was great fun reading about all those cats. And great pictures too. They all look so cute. Course, we love the little calico kitten. Hope all of you have a great day. Mahoney says hi to you too.

Thank God that Lumpy and you found one another. That breaks my heart knowing what he went through. I wish people like that got back everything they "gave" to innocent animals.

What a nice furry family album! Every kitty is special and leaves paw prints on our hearts no matter how much time we have to love them.

what a special post! Thank you for sharing!
You feel bad that you just got an award and couldn't post about it TODAY?
One of them that I was given this week I'm not posting about til OCTOBER....don't feel bad! lol

Awww, What a great cat history!

Your Mommy was brought up right with all those fabulous kitties! CC must channel Attila, he's a potty policeman too.

what wonderful stories, and we were so glad that Lumpy loved and cared for after such a bad start.

What a beautiful bunch of kitties before you. Thanks for sharing them with us.

We loved seeing all the Kitties that came before. Lumpy ... well he brought a lump to Mom's throat what a special kitty.

Mowsers, Lumpy was one lucky kitteh to be adopted by your humans! And we looove Toby's many toes!

Awww. Sweet memories. Once again, I just want to say how lucky you guys are for having pictures of your old angels.

We heard your Grandma wasn't feeling well so I came to drop off some purrs for her.

We came to say we hope your Grandma will be feeling better soon.
Luv Hannah and Lucy xx xx

We are devastated by the loss of Aimee.
Thanks for the kind words and for your support.
We are very grateful!
Marilia

Thank´s for sharing all thoose pictures of all the cat´s you had !

I read over at Marg's that your Mom is feeling poorly--purrs and prayers from all of us for her and you and the family.
{{hugs}}
Trish xx

Marg mentioned your grandma is quite sick, so we came with our purrs. We're not sure if she meant your human's mom, or your human's grandmother...Whoever is sick, we're sending up purrayers for healing.

Alasandra, The Cats and Dogs said...

Thanks for sharing all the kitties who came before, they sure were cute.

Marg mentioned your Grandma is sick we are sending healing purrs and positive vibes for her.

Lumpy sounds like a hardy cat who used his 9 lives.

We hear your grandmother is very sick so we came by to leave lots of {{{hugs}}}, purrs and pawhugs for all of you.

Thanks for sharing those who came before.

We wanted to stop by to tell you we're purringt and praying for your grandmother.

The Florida Furkids and Lexi

Oh poor Lumpy! My dad had a cat with extra toes. He was called Pepe Le Pew.

Thank you for your kind messages for Scooter :)

We enjoyed your post about all the kitties who you have loved!
We are stopping bupy from Marge's, she said your Grandma was poorly! We hope she feels better real soon and we are sending prayers, purrs and Wirey hugs her way!

Sending good thoughts and purrs that your Grandma will be kept well with the help of the doctors. I am so sorry to hear that she has leukemia. Keep us posted on how she is doing.