We are so happy to be back in action!  We were away a little longer than the Mom thought we would be, but she is so excited because she found old photos of her first kitty while she was away, and she can't wait to tell you about her during a Flashback.

Just before we left, Sherlock from Feline Purr-spective awarded us the "Seven Things About Me" Award.  We are so excited cause we think the world of the Sherlock, Ash & Traveler.  They are the sweetest kitties, Sherlock even allowed his mom to stuff his butt in a pumpkin and take pictures.  We don't think our mom would have survived if she tried that one here. 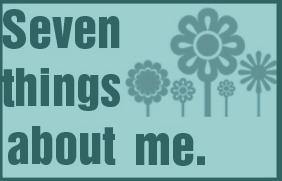 R - Carl is a momma's boy.  Its true, he keeps her place warm then loves to head bump and snuggle up to her.

f - Julie sits up and waves at the mom when she wants attention.  She learned this from her older sister, Minnie Pumpkin. 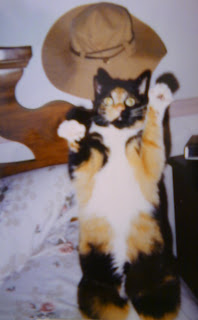 Julie is a copy cat!  She learned good things could happen if you wave and look cute. 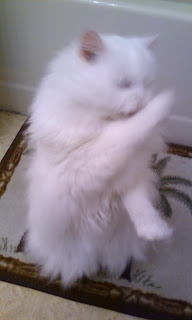 A never-before published photo.  Yes, its that bad, but the mom just lowered her pathetically low standards.  She's been hoping for a better shot, one day.


% - Oui Oui has been really bad lately.  Even though she has slept every night of her life with either The Girl or the mom, she's been running downstairs at night to sleep in the dining room.  She takes one look at the mom at bed time and hauls butt down the stairs as fast as she can.

3 - Mica Minnie Moo, the least fussiest eater ever, doesn't like her calming treats.  They have to be hidden in an "appetizer".

c - Oui Oui, the fussiest eater alive, LOVES the calming treats and tries to steal the bag when the mom isn't looking.  In fact, she has tried to steal it out of the mom's hand when she has been looking.  The irony is just sickening. 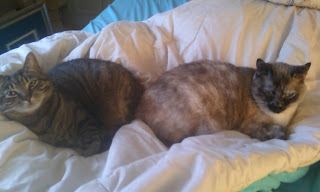 M - Julie & Carl are the good kitties here.  To them, a treat is a treat.  They don't care what is inside so long as its edible.

We now have to pass this on to seven kitties.  We have been out of the loop, so we hope none of you have already gotten this award.  This is the really hard part of the award!

FINALLY, and certainly not least, there is another award for Carl at sweet Katie Isabella's, but that is for another day.  Thanks, sweet Katie!  You and your story is an ins-purr-ation to us all.
Posted by Oui Oui at 9:43 PM

Congrats on the lovely "7 Things" awardie!

And thanks SO much fer sending it on to me individually! We have gotten some awardies in the past to all of us, but Marley got one ALL HIMSELF few days ago an I was SO jelous... Now that is balanced!

Concatulations on the award! We love to learn new things about our furriends. Happy Monday! xoxo

Scouty is SPEECHLESS! An award just for HIM!!

Concats on your award...we see you use the same numbering system that we do! The treats situation had Mommy groaning in sympathy, while we just laffed and laffed.

we loves teh waving kittehs! who would stop to give a waving kitty a treat? it's like an ingenious plan to hypnotize peeps into loving you. Brilliant.
Congrats on teh award!

Well, see, now, these seven things are SOOOOO much better than my seven things that I am hanging my royal head in shame.

It's the Human's fault, I am sure.

Concatulations on your award - see, there is always something new to blab! Welcome back - I've missed you!

Congrats on your award! We love learning things about our friends!

Milita will sit and wave at me when she wants some chicken. :) It's the cutest thing!!

We loved reading some more really good stuff about all of you. And wow, we got the award twice. We can't wait to do that. So thanks for that. Mahoney and Two are very honored and as soon as they learn to type, they will write all about themselves.MOL. Take care and take it easy please.

Welcome back! And congrats on your award! We enjoyed learning more about all of you. It's cute that Julie waves at your mom to get attention...so cute, we're sure it works!

Concats on your award - we love learning more about our friends.
Luv Hannah and Lucy xx xx

can you please teach me how to count? i'm really bad at it! - Miles

Congrats on the award and welcome back too!

Welcome back and congratulations on your award! There's ALWAYS something new to learn about our furriends. :)

Glad to see you back! Concats on your award.

Concatulations and welcome back!

We had to laff at Oui Oui "hauling butt"! *snicker!*

Oh CARL! I can't wait to see what you say! XXXOOO

We always love learning cool things about our pals!!
The Florida Furkids

Concats on your awardie! It's so nice to read about our furriends.
xoxo Kassey

Glad to read you again!
My human was laughing hard at Oui-Oui's calming treats Vs. vitamins food preferences. I don't understand why to be honest!
Concats on the award!

ConCATs on that great "7 Things" award, and thank you for passing it along to us. We will definitely post about it sometime soon. :)