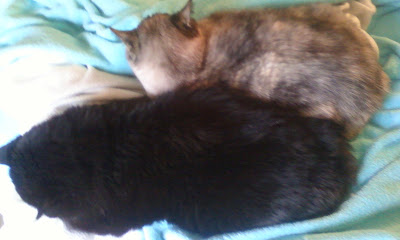 This is what the mom saw Sunday morning when she woke up.  Never in any of our wildest dreams did we  think we'd see these two together.  And to make it more surreal, Carl was purring! 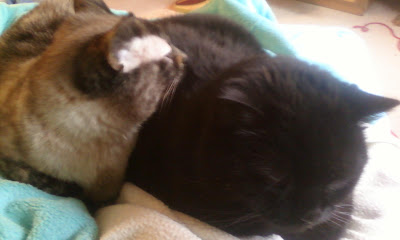 There was no growling on Miss Hiss's part either.  Although there were no witnesses (or at least none who are speaking), MMM must have been the one to join Carl since she would never allow him to approach her. 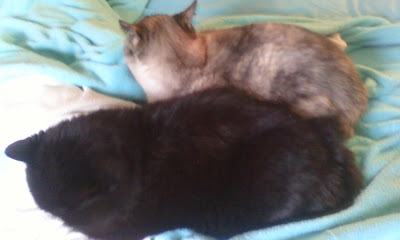 Although Carl has never done anything to MMM, she has never liked him.  She has always growled or hissed at him.  She used to whap him before she'd lie down on the bed to nap. Most times he wouldn't wake up.

Whatever the reason, we never expected to see these two huddled up with each other.  The foot of the bed is one of Mica Moo's favorite places.  Probably Carl was there and she didn't want to give up her place, so after the appropriate amount of growls, she joined him. 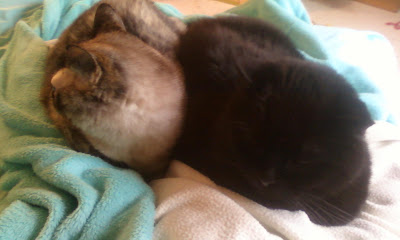 Either way, the mom is now hoping MMM will relent and stop fussing about Carl.  Perhaps with one less stressful thing in her life, she will allow her eye brows to grow in.  Maybe there will be an end to all world wars, famines and hunger will be a distant memory, and Congress will balance the budget.
Posted by Oui Oui at 10:34 PM

That IS miraculous! A repeat would be even moreso.

This is wonderful. Keeping our paws crossed it'll happen again.

Wow, this made our Monday brighter!

Awww, I hope it's a sign of things to come! That would be so wonderful!

Whoa! One miracle at a time. What a great start. Happy Monday! XOXO

That is terrific that MMM has decided that Carl is all right. Good for her. It takes feral cats a very long time to adjust to being inside and if she was three when you got her, she is doing great. Hope all of you have a great week and MMM keep up the good work.

I guess you just never know, awesome and let's hope it stays that way.

What wonderful photos! Yes, it means there is hope for us all!

I think she was just playing hard to get :)

Oh what a sight THIS is! Carl darling..it's your charm that caused this rupture in the Time -Space continuum!!

Wow! Just goes to show that miracles do really happen.

MOWZERS! A MIRACLE! How cool is that???

Balanced budget here we come. Or Faraday will stop attacking Allie. (HEY KATIE, there's hope for you & Waffles yet!)

wow. i think these two deserve a Nobel Peace Prize. I'll get Oslo on the phone now...

Maybe she was cold.

But it's very cute. And any step toward world peace, even a small one, is welcome ;-)

Mebbe its the start of a bootiful friendship!