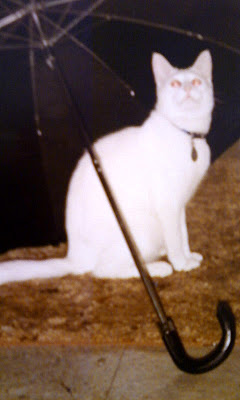 Today's Flashback Kitty is the mom's second kitty and her first mancat, Attila.  He was Leia's son and the first critter the mom watched being born. 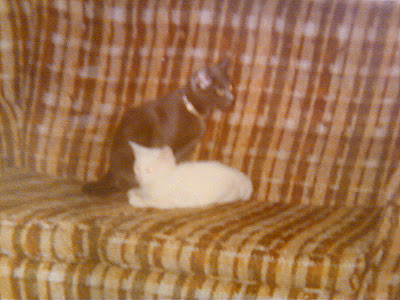 He was born in the middle of the night, September 20, about a month after the mom took Leia in and was named for Attila the Hun.  (The paternal side of the mom's family is from Bakony Jako, Hungary.) 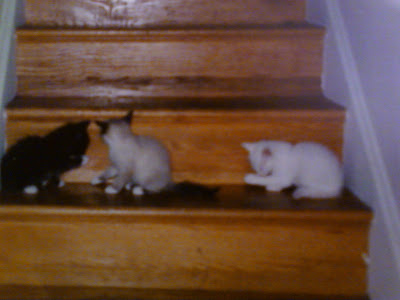 He was white with blue eyes, but not deaf.
You can see he had a brother with meezer marking
and the mom believes his father was a meezer
so he didn't have the genetic link to deafness.
His eyes flashed ruby red like a meezer's too. 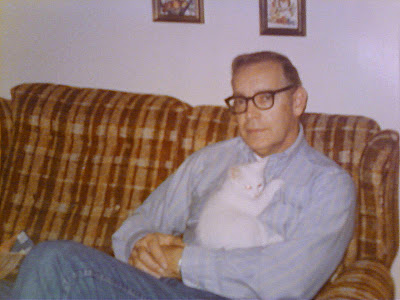 Everybody loved him, he was all sweetness.  Maybe because he had a great mother and was never separated from her.

(This is Attila with the mom's dad.) 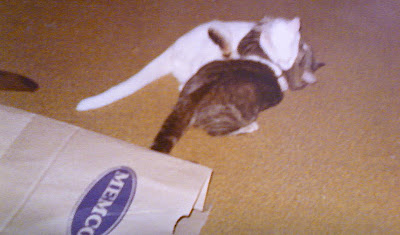 He never met a kitty he didn't want to play with.  This is cousin Tigger, a kitty rescued from a dog when a couple weeks old.  Attila taught her how to be a cat.

He's only half grown in this picture and he's the same size as Tigger. 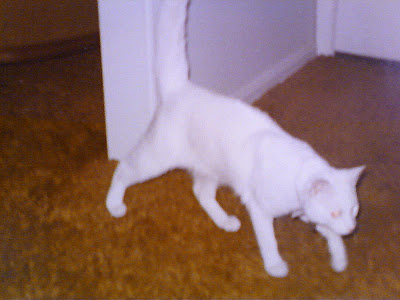 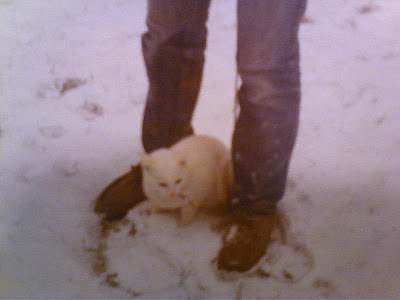 His first winter the mom took him for a walk in the snow.  He enjoyed other things much better. 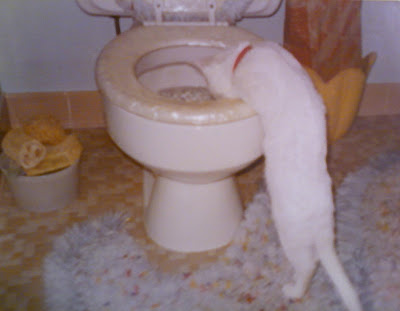 Like watching the toilet flush.
He also enjoyed unrolling toilet paper
and to this day the mom still hangs it "backwards".

He also loved sleeping under the mom's head and tried to crawl under her head from the time he was a very tiny kitten.  He loved his food!  There were no late hours in his household.  If a light bite on the nose wasn't enough to get the mom out of bed, then a very gentle scratch to her eye lids certainly did.

We hope you liked this little story about one of the happiest, sweetest kitties ever.  Enjoy your weekend!  We have a big day coming up shortly! 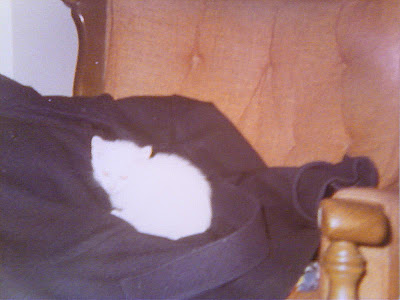 We enjoyed meeting Attila. Thanks for sharing his story with us!

So sweet. What happened to the middle brother? Looks like a Snow Shoe.

A very sweet story. What happened to the one who had meezer coloring?

Loved this! Thank you so much for sharing about Attila. How wonderful that you have so many pictures of him. It's so sweet to see him with your dad. Loved the one of him watching the toilet flush. :)

I meant to mention it yesterday but forgot. I'm so sorry about your uncle.

What a handsome boy Attila was!

Attila sounds like a wonderful guy, and very special.

WEll that was fun hearing all about Attila. He sure was handsome. Looks like he really enjoyed life. Hope you have a great day and a good week end.

IT was so much fun hearing about Atilla! We will have to see if the head peep has any photos of Cyrano, her former cat who also loved to watch the toilet flush. That photo made her smile.

That was a terrific flashback and such a sweet and handsome dude!

dude & sauce at RB and

Attila didn't look very happy being in the snow but he sure did LOVE that flushing toilet bowl! Hahaha!

We loved this post about Angel Attila! He sounds like he was an amazing kitty, and we look forward to meeting him one day at the Bridge. We bet he and Sammy are pals there. :)

Thank you for sharing Attila with us! What a sweetie! Purrs...

what a sweetheart! Thank you for introducing him to us!

Those were wonderful stories about Attila and we so enjoyed them. Flashbacks are a great idea.

I love seeing the babies who came before...

Loved this post. What a sweet kitty. I can tell he was something special too. We love all our furbabies, but now and then there is just one that stands out above the rest. Was this one your special one?

wow that must have hurt the eyeballs haha nice past meet and greet, hate snow too.

Hmmm, TBT says mebbe he has missed something not having a blue-eyed white male cat... WE say, there are enough here now an he better NOT get anny ideas.

It was furry nice to meet Attila !
He sure was a handsome kitty !
XOXO

Attila sounds as if he was a wonderful boy and much like our angel Madison, who was also a large, blue-eyed, non-deaf male kitty. Thanks for sharing this info and the photos. Purrs and hugs, Lily Olivia, Mauricio, Misty May Giulietta, Fiona, Astrid, Lisbeth and Calista Jo