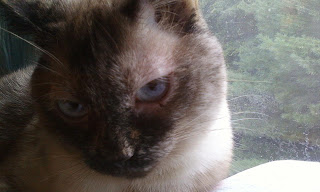 I don't like to talk about or think of my days on the streets.  I wish I could say I ran with a gang of Chiwahwahs like Kismet, but my life was not that much fun.  Eventually I was caught and brought to a loud,  noisy and scary place with lots of kitties and dogs.  I spent my days throwing myself against the bars holding me in, trying to get free.  (Feral kitties do that the Vishus Evil Torcherer (V.E.T.) said.)  I was taken in a PTU to a really big place with lots of kitties walking around free, but I was scairt and lived mostly on a little ledge on the wall.  They had the most delishus food and I ate everything!!  I am a purry good eater and I love food a lot!  They did lots of scary bad things to me, they even cut my tummy open.  A couple days after that I was put in a PTU and taken to a House.

I had my own room all to myself!  The first night I was so happy I lost my head and even played with the toys the people had!.  And I purred.  But I still lived by the rules of the street.  Don't put yourself in harm's way.  When I played with the people, most of me stayed under the bed in case something evil happened.  The Lady said I was like a hermit crab with only the front end out of its shell.  Nothing could get me out farther, not even food.  Don't get within arm's reach.  No matter how hungry you are, don't come out to eat until its safe, and they are far enough away.  Maintain  your distance.  Always have an exit.  I am still like this today, but not quite as bad.  Just try to catch me though!

One day the Lady touched my back.  It felt really good what she was doing, but I didn't know what it was.  I turned around fast to see and that scairt her.  It scairt the Girl and the V.E.T. too when I did it to them.  None of them saw anyone move as fast as me unless they were attacking!  One time it felt so good, I threw myself on the floor and almost rolled around before I realized what I had done.  That time I scairt myself and had to run away!!  After a while, I didn't have to turn around anymore.  Now I like it most of the time.

I could smell other kitties in the house, but I didn't meet them for a while.  I'll tell you next about how Oui and I became friends, and Julie and I enemies. 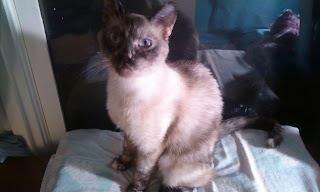 This is me when I first came 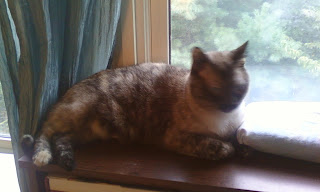 Hi there Mica Minnie Moo. Our Maggie knows just how you feel right now. That first couple of days or in fact the first couple of weeks is so scary. It is good to hear your story. We were all ferals too but are very happy now to have a real home. Take care and have a super day.

Hi Mica Minnie Moo. We think you're a very lucky kitty to end up in a wonderful home that accepts you just as you are and doesn't try to make you into a lap cat or something else you're not. :-)

You have found just the right family to take care of you Mica Minnie Moo - we are looking forward to hearing some more of your gotcha story.
Luv Hannah and Lucy xx xx

That is quite the story sweet one and I'm looking forward to hearing more about you. Gotchas are wonderful and you found such a great place!